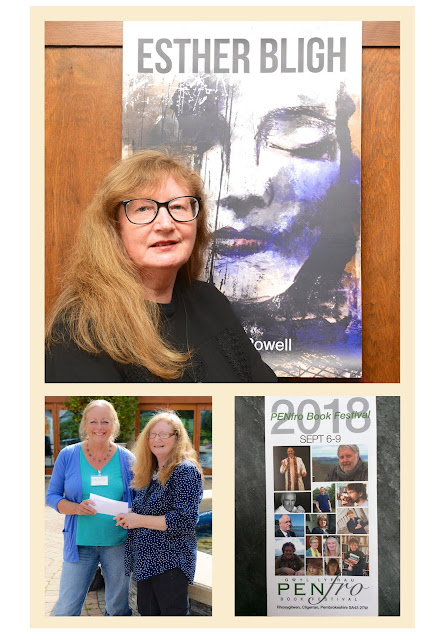 Taking part in PENfro Book Festival earlier in September was a special moment for me. I was there, as a published writer, featuring in a Writers’ Panel, in which I discussed my work, and in particular, my novella, Esther Bligh. In fact, according to the adverts for the programme, I was one of the Sunday morning ‘stars’…!

I think it was in 2013 that I attended my first PENfro, not long after moving here. It had been wonderful to discover that Pembrokeshire had its very own literature festival, providing workshops and talks by some top writers – and to find that it was held in the beautiful setting of Rhosygilwen Mansion was an added bonus. It was worth a visit simply to explore the grounds, and sample their quiche and cake!

And then, the following year, I won the Short Story prize, for my story ‘Ingrid, Audrey and Jean.’ No-one was more surprised than I was, and I still worry that I didn’t thank anyone when I received my prize – I was in such a daze! It was a real boost to my writing – an indication that my work had some value. Particularly inspiring were the words of the judge, Maria Donovan, who said: ‘This is a short story perfectly in tune with itself. From its enigmatic title and first arresting image to the underlying themes of escape and belonging, it always keeps ahead of expectations. Calm, confident and disturbing: a treat to read and re-read.’

It was rather a case of ‘oh, did I really write that story?!’
Because of these comments, Maria is one of the two authors I acknowledge at the end of ‘Esther Bligh’, along with Helen Carey, for helping me believe that I could write.
The story was later chosen to be included in the anthology ‘Secondary Character and other stories’, a collection by the Welsh Short Story Network, published by Opening Chapter. This was the first time for my work to appear in a book – another proud moment.

And I read ‘Ingrid…’ at Rhosygilwen the following year, one of my first experiences of open mic. So it is no wonder I have a lot to thank PENfro and Maria for, on account of that story alone. It still remains one of my favourites.

In that next year, 2015, I was commended for the Memoir Prize, a result I was more than happy with, as this was a new genre for me, and my piece is still the only ‘personal essay’ I’ve written.

In 2016, I was short-listed for the ‘First Chapter’ competition, with my YA novel, since put to one side, but another useful validation of my work.

And now, this year, to appear on the other side of the table has been another significant step on my journey as a writer – which was, indeed, the theme of the panel. I was there along side Hilary Shepherd, another fiction writer, whose novel ‘Albi’ was published earlier this year. The talk was facilitated by Brenda Squires, chair of the festival committee and owner of the beautiful Rhosygilwen, who effortlessly prompted us with questions about the writing process, in relation to our recent publications.

The Writers’ Forum at Tregwynt had started me thinking about such things (see previous blog), and this was an opportunity to delve deeper into the issues raised. ‘How did ‘Esther’ come about?’ ‘What has it meant to you?’ ‘What are your experiences of the publishing process?’ – these questions were about my novella, but we were also asked how we came to writing, and where our journey was taking us next.

With all this in mind, I started a sort of ‘writing journal’, where I put my thoughts on various topics, and also quotes from other writers, that I feel echo my own views. It’s very useful to see where patterns emerge, so that you begin to think ‘yes, that’s where I am with my writing.’

We both read from our work, and ended with questions from the audience, which can be a scary moment, as it could be about something you haven’t thought of at all.

So, a big thank you to PENfro, to Brenda, and all the committee, for inviting me. And to Hilary, for being there with me. And to the audience, who were very forgiving, and who did applaud at the end, which is encouraging!

Pembrokeshire now has another literature festival, at Llangwm, in August.

I, personally, think the county has enough room for two (if not more!), as there is sufficient variety between them. And, with a wealth of local talent, and top writers from further afield more than happy to visit our beautiful part of the world, I see no reason why they should not both be able to continue to flourish. But I suspect that PENfro will always have a special place in my heart. It seems quite appropriate that the subject of the panel was The Writer’s Journey, as PENfro has been such an important part of mine.

Posted by Diana Powell Writer at 17:13 No comments: