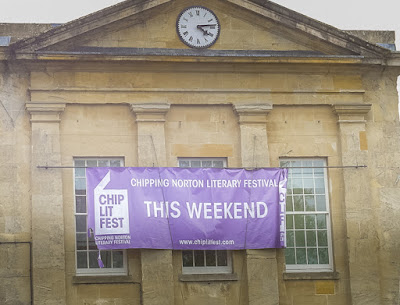 For a writer, there’s always something rather thrilling about featuring in a competition. It doesn’t matter if it’s a short-listing, a long-listing (I’ve talked about this in an earlier blog), or highly-commended – all of these are an indication that your story has met a certain writing standard, as judged by a knowledgeable reader, or readers. (There’s an interesting article on this subject by Kit de Waal on the Bridport Competition site.)

Earlier this year, I was short-listed for the H. E. Bates prize, for my story ‘Miss Bird Catches a Wave’, which was long-listed for last year’s Yeovil Prize. This is great – it’s telling me that two quite distinct sets of judging panels consider this particular work to be of note. It’s a story I myself think well of, so it’s good to have this external, objective approval.

Another piece I was especially pleased with was one called ‘Whale Watching’. After you’ve been writing short stories for a while, you tend to get a feeling for what’s good, what’s okay, and yes, sadly, sometimes, what is bad (you really shouldn’t have written this; what did you think you were doing…?!) ‘Whale Watching’ I liked from the first stirrings of the idea, through to the final draft. I also liked the fact that it was set in Fishguard, which I would now call my home town. The story centres around a narrator who, as a little girl, witnessed the filming of ‘Moby Dick’ in the lower harbour – a true event, which took place in nineteen fifty-four. The film starred Gregory Peck, and Richard Basehart, and was directed by John Huston, and is celebrated as part of Fishguard’s colourful history, although it tends to be rather over-shadowed by the later ‘Under Milk Wood’, which brought Richard Burton into the many pubs, happily drinking with the locals. Still, you will find ‘Moby Dick’ commemorated in the local heritage centre, and as part on the mosaics on the Goodwick sea front. 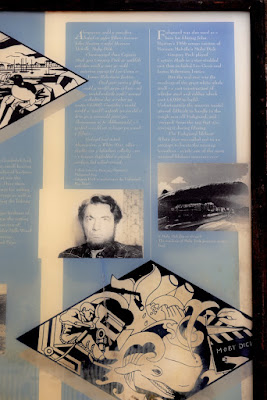 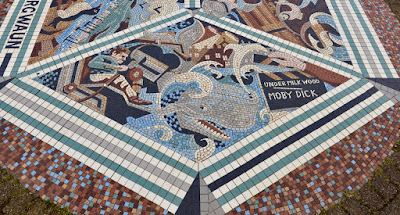 Film-making, perhaps more than any other form of arts genre, plays tricks with reality. The camera (which certainly can lie), the editing, the ‘acting’, the props, the stunts – all these fool the viewer. The rumours surrounding this particular filming are legendary. Was there a life-size white whale? One? Two? Three? Did Gregory Peck get swept out to sea, strapped to its flank? Did the coastguard have to be called?! It is hard to discover the truth from … not, perhaps, ‘lies’, but ‘fabrications for the purposes of publicity’. Or perhaps it was no more than poor memory, after the event.
Because memory is something that plays tricks, too. So it is for the narrator in my story. Seeing the filming was the highlight of her childhood, and remained the greatest excitement of her life. She is obsessed with it, as Ahab was obsessed with the whale. But what she remembers is not necessarily what really happened.

I entered ‘Whale Watching’ for the Chipping Norton Festival short story prize. Despite my feelings that it was a good story, in the end, you never know. Luck has to come into it. And taste. There is such variety in the short story form, it is impossible to please all the judges all of the time. You may just submit to the wrong competition (which is why it’s important not to be too down-hearted if your story gets nowhere, and to keep at it, if you honestly believe your piece has merit.)
At the beginning of March, I received an email listing the short-listed titles, in alphabetical order. Of course, as mine was called ‘Whale Watching’ it came at the end of the list of twelve, and by the time I reached it, I’d already written myself off, so it was a pleasant surprise to see I had made it through, after all.

Those twelve stories were then passed to judge Nicholas Royle, for his final judging.
Nicholas Royle has written three collections of short stories, and edited twenty anthologies. He is a reader in creative writing in Manchester Writing School, runs his own press, and works as an editor for Salt publishing.

So this is someone who is an expert in the field, both as writer and editor.
Did I stand a chance?

Then, in late March, the ‘winners’ email arrived – the three top-placed stories. And first was Diana Powell. It took me a few re-readings to realise I had actually won. And a few more days of waiting for an email telling me they’d made a mistake, before I fully accepted it.

Besides the actual monetary prize, (which is always very welcome!), the Festival held an Awards Ceremony, in which Nicholas himself commented on the top three stories, and who doesn’t feel happy to receive such praise!?  The word ‘masterful’ is in there somewhere.

Not only that, but as an additional bonus, my story, along with the second and third placed, was read out by LAMDA-trained actor, Karen Jackson. I’ve read my own work before, and I know I’ve improved over time, but to hear your entire story read by a professional is quite an experience.

Below is a short section of a recording from the ceremony.

‘Whale Watching’ can be read in full on the Festival website: www.chiplitfest.com

Thanks to all involved in the Festival, particularly Cathy Evans for organising the competition, and Nicholas Royle, and Karen Jackson.

And thanks, too, to ‘Moby Dick’ and the inspiration it gave me.

And the icing on the cake?  Nicholas Royle says ‘Whale Watching’ will be included in next year’s ‘Best of British Short Stories’. Wow!
Posted by Diana Powell Writer at 16:38 No comments: